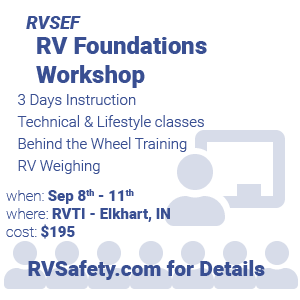 John Anderson is a former U.S. Naval Aviator and professional commercial pilot. During his time in the Navy, John served 3 years in Vietnam, during which time he was awarded the Navy Commendation Medal with Combat “V”. He also served as the Flight Deck Officer aboard the USS Princeton which recovered the Apollo 10 astronauts. Following his Navy service, John worked as an experimental test pilot and as the Aviation Manager of a large corporate flight department.
In 1993 John founded A’Weigh We Go, the predecessor to RVSEF. After purchasing an RV that experienced frequent tire failures from an overweight condition, he decided to pursue an effort to educate the RV community about safety issues, with a goal of bringing about a harmonious collective effort among the various segments of the RV industry, including consumers, dealers, suppliers and manufacturers.