As our roadways become more congested, transitioning intersections becomes more frustrating and time-consuming for drivers. Older intersections just weren’t built to handle today’s heavier traffic volume. Researchers from various private and government organizations in the US and other countries have studied intersections and done numerous test to develop alternatives to traditional intersections. The goal of these studies is to reduce the points of conflict at any given intersection while preserving the effective movement of vehicles. The balance of mobility and safety is a difficult road to travel and some sacrifices must be made to keep our roadways safe and effective. The implementation of the results of these studies range in costs from simple signal and signage improvement to the total regrading and reconstruction of the intersection.

There are dozens of types of innovative intersections across the United States and each has been proven to work in specific situations. Many of these innovations have been regional in their adaptation such as the Michigan Left, the New Jersey Jug Handle and the use of Continuous Flow Lanes in the Mid-Atlantic States. However, as all states struggle to balance traffic flow and safety, we are seeing major changes to intersections throughout the US.

You have probably already seen several of these options in your driving experience, but the first time you encountered them it might have been a bit off-putting. In this article, we will review several of these innovations and give the RV driver a few tips for navigating these intersections with their taller, longer, and wider vehicles.

In a crossover intersection, traffic flow moves to the opposite side of the road to more safely accommodate left hand turns. This keeps traffic moving and reduces the number of fatalities at busy intersections. The first time you approached a crossover intersection, it was probably a bit confusing. Following road and pavement signs and watching other vehicles helped, but you probably ended up on the other side of the intersection wondering what happened. “Displaced Left Turn Intersections (DLT)” and “Diverging Diamond Interchanges (DDI)”, two types of crossover intersections, can be confusing at first but each provides fewer points of conflict for the driver while allowing traffic to move smoothly. Studies have shown the greatest benefit of these intersections was an almost complete elimination of left turn crashes and more than a 70 percent reduction in right angle crashes.

All roundabouts in the United States have a few common characteristics: they are a type of circular intersection where traffic always flows counterclockwise around a center island, vehicles entering the roundabout yield to traffic already circulating, and the curved shape of the roadway slows vehicles down to 15 – 25 miles per hour. Roundabouts are often safer and more efficient than conventional intersections and they greatly reduce the number of accidents that cause death or life-changing injury by about 80%.

Roundabouts do not have to be round. They can be oval, teardrop, or dogbone shaped. While most roundabouts have three to four legs, some can have as many as six legs. No matter how your roundabout appears, remember that traffic in the US always flows clockwise and entering traffic must yield to traffic already on the circle. 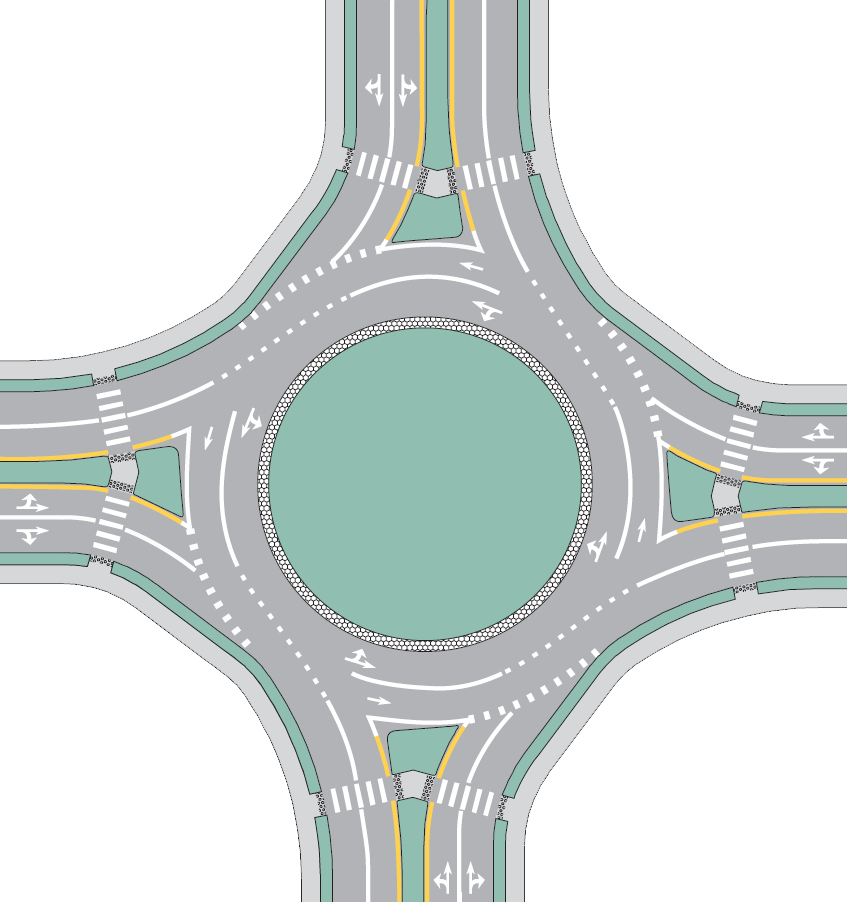 Most roundabouts along major roads and highways have wide, angled entry points and a low center area that can be driven upon to accommodate larger vehicles. This makes it much easier to RV drivers to navigate these intersections. However, in some neighborhoods, there may be narrow circles with high curbs that make navigating in an RV quite difficult. It is always best to double check intersections when driving side streets through small towns and cities.

Mini roundabouts are similar to regular roundabouts, but with a smaller footprint and a crossable island. These are found in areas with slower speeds and smaller roads. Again, watch for curbs and other factors that might make traversing in an RV difficult.

Restricted Crossing U-Turn Intersection (also called the R-CUT, J-turn, or Michigan Left) requires a driver wishing to make a left turn to pass straight through the intersection, then make a u-turn to head the opposite direction, and finally make a right turn at the original intersection. While overall time-saving factors have not been clearly determined, this type of intersection has reduced vehicle to vehicle collisions up to 50%. Right-angle collisions occurring at traditional left turn intersections are the most severe type of collision and are more likely to cause death or life-changing injury.

While not common, a quadrant roadway intersection (QR) or Jug-handle utilizes an intersection bypass or detour for all turning traffic. This increases intersection capacity and allows the main intersection signals to more efficiently move traffic and pedestrians straight along the roadways.  There are, however, several downsides. These intersections are often confusing to drivers, there is a high potential for vehicle operators to drive in the wrong direction, and there is little research to determine increased value of these intersections. For Further Study:
Design at the Crossroads, FHA