Signs are standardized to help motorists quickly determine the type of information they display. Color and shape give cues to help the driver understand the roadway situation the sign is identifying.

The Manual on Uniform Traffic Control Devices has over a dozen major sections on the design of roadway signs alone.   We will not go into great detail here but as mentioned previously, it is always good to review road safety and information lessons we learned years ago. These signs use colors, words, symbols, and arrows are used to convey regulations, warnings, and guidance information for roadway users in the United States.

Color and Shape let drivers identify the type of sign from a distance.

Sign Color of roadway signs indicate what kind of information they contain.

Signs naming highways have shape and color specifications also. In the diagram below, major roads are designated as follows left to right: Interstate Highways, Spurs or Loops, US Highways, State Routes, County Roads, and US Forest Roads.

Specific RV designations: There is an experiment that began in 2003 using an “RV Friendly” symbol placed in the lower left corner of a rectangular blue information sign. This symbol indicates the facility has RV friendly access to parking. Oregon and a few states have proceeded with the optional project, but it seems slow to catch on. 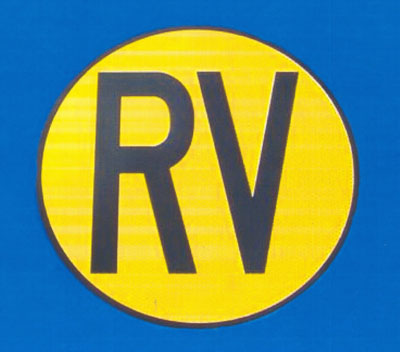 There are myriads of variations and specific instances of signage in MUTCD. If time allows, we will address some of those in another article. For now it is good to remember what the color and shapes of roadside signs mean.

While standardization in signage has been in place for quite some time, safety minded people are always working on innovations to improve roadway signage. Many of these innovations are initiated by state and county highway departments and, if successful, tested on a national level. Some of these changes are implemented in other areas in following years either voluntarily or through a policy change. Others aren’t deemed a significant benefit and the system reverts to its original pattern.

However, other signage innovations have caught on quickly.

Studies in Texas and Virginia found that LED-enhanced signs significantly improved safety at intersections by enhancing driver awareness. They are most effective during low visibility or when there is a curve approaching an intersection. Examples of LED-enhanced signs are stop signs, pedestrian crossings, and speed warnings around curves in highways. These signs are solar powered and can be solid or flashing lights. Some are always active while others are activated by proximity of vehicles or pedestrians.

Lighted signal heads at intersections have undergone a few minor innovations that might have gone unnoticed by most. The bulbs in many signals have been changed from incandescent to brighter, more energy efficient LEDs. This makes it easier for motorists to identify lights at intersections in more visually congested cities. Another signal innovation used in many cities is to add a reflective yellow back-plate to signal faces to further draw the attention of motorists by providing contrast and framing the signal.

Fiber optic regulatory signs have also been added to better control traffic at intersections. A “No Turn on Red” sign can illuminate when opposing traffic is turning left causing conflict with right turns. Once the left turn signal is red, the “No Turn on Red” signal is turned off. In communities where trains or trolleys share city streets with vehicles, these signs can indicate when a train is present by illuminating during that time of potential conflict and turning off when the danger is passed. This greatly benefits RV drivers since their vehicles are larger and move more slowly. It is not always easy to get out of the way when a wrong move is made.

When navigating unfamiliar areas, the ability to see street names is of great importance. Sometimes it seems as those these signs are intentionally hidden from view! While GPS and other navigation systems can assist RVers in cities, finding the correct street remains a daunting task. Many urban areas have changed street signs to allow drivers to more clearly see what is ahead. Internally illuminated street name signs, larger lettering, and larger signs are a great help.

Across the globe, officials are attempting to make the smart phone generation a bit safer. Several cities are implementing in ground street signals so that people distracted by their phones can see when the street light changes and it is safe to walk. While this seems like a great idea, we at RVSafety.com have mixed feelings about this. Everyone using the roadways system, including pedestrians, should avoid phone use while moving. Whether walking or driving, everyone needs to pay attention their surroundings and the traffic around them. A lighted crosswalk cannot tell you if a vehicle in the roadway is about to run a red light and put your life in danger. There is no innovation that can replace personal awareness and personal responsibility.

Another Interesting fact: Did you know that on November 20, 1923 Garrett Morgan patented the first three position light signal? While there were already two position light signals in existence at that time, Morgan's signal added a third light, further adding to the safety of intersections.

All photos are from the Federal Highway Administration website.